Strategic Movements in the Afzhal campaign

We are well versed with the story of Shivaji Maharaj single-handedly destroying Afzhalkhan at the battle of Pratapgad, and the following counter attack on Vijapur territory that increased the Maratha empire by a few folds. I wont be dwelling on too much details- but would try to touch the key aspects of war strategies- intelligence, diplomacy and troop mobility.

Shivaji Maharaj had entered Kokan region and wreaked havoc over there- both political and religious, as the spread of Islam became difficult. The Vijapur Sultan in order to curb these activities and thus remove the hindrance to the spread of Islam had appointed Afzhal Khan to either capture or kill Shivaji Maharaj. Afzhal when he started boasted a huge army. Several other leaders would join him on his way to the campaign. Afzhal started from Vijapur, but instead of coming to Pune- which was the principal jahagir of Shivaji Maharaj, he instead attacked places like Tuljapur, Pandharpur etc, and destroyed the temples over there. His motive was to draw Shivaji out of the mountains into the open plains, where the Marathas would be easier to defeat. His route, thus looks a little bit ridiculous. Although it was a good strategy to try, the Marathas had excellent knowledge of their strengths and weaknesses, and thus, refused to come out. Shivaji Maharajs diplomacy should be noted here. He did not even bother sending a letter to Afzhal to stop the destruction. Afzhal thus had to abandon that plan. 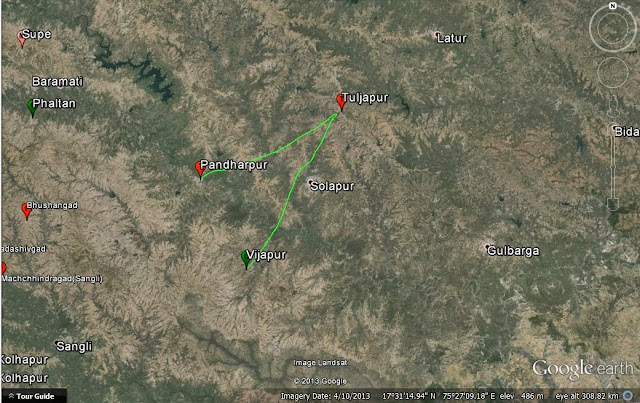 
The Maratha Diplomacy to draw Afzhal to Jawali and the Maratha Defence.

Shivaji Maharaj knew the Sahyadri Terrain inside out, and decided to trap Afzhal in the jungles of Jawali, and thus made his move from Rajgad to Pratapgad which was situated in the heart of Jawali forest. Afzhal in the mean time made his move from pandharpur to phaltan to wai. At phaltan, he imprisoned Shivajis brother in law, who ironically was fighting from Afzhals side, and sentenced him to death. However, again using cunning, clever letters Shivaji made sure that his brother in law escaped death. Shivaji in the meantime with tremendous help of Kanhoji Jedhe had managed to unite the Deshmukhs of Mawal under the Saffron banner and to fight for the cause of Swaraj- the exception to this being Khandoji Khopade, who defected to Afzhal. 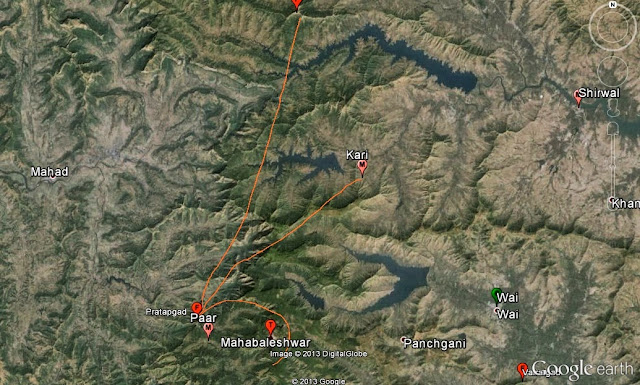 Afzhal had decided to play his next game sitting at Wai- near enough to the mountains, but still on the plains, and hoped to lure Shivaji out of the jungles of Jawali into Wai, and then kill or capture him. When he had reached Wai, he had captured 4 locations of importance- Pune, Shirwal, Saswad and Supe. Many sardars had joined the main afzhal army from Vijapuri forts all over Maharashtra, as the sultan had issued such orders. The killedar kept only a few handful of soldiers that were needed to maintain the fort, and sent the rest of the army to join Afzhal khan. In addition, the Sultan had also sent 3 ships with supplies to the creek of Rajapuri, should Afzhal have to base the campaign in Kokan. 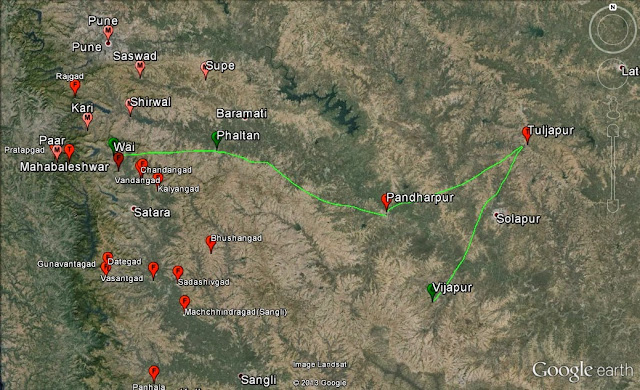 (Afzhals Movement from Pandharpur onwards to Wai via Phaltan) 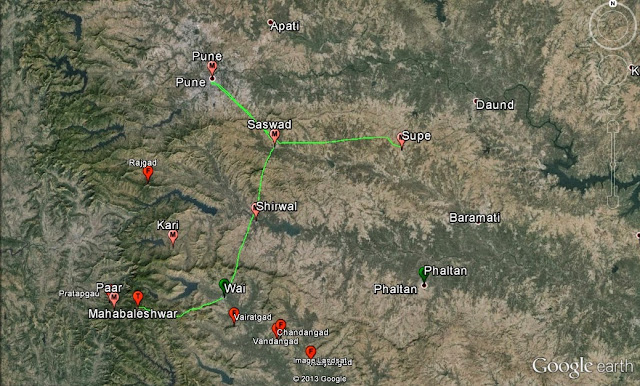 Shivaji knew of Afzhals intentions through his superb spy network which infiltrated the Afzhal camp. Moreover, through sheer diplomacy, blatant lies, and a superb drama of being scared to meet such a powerful leader, Shivaji sowed seeds of arrogance and overconfidence in Afzhals mind. His vakil convinced Afzhal to believe that Shivaji was genuinely scared to come and meet Afzhalkhan, and thus is requesting him to come and take him away from Pratapgad. The seeds of arrogance which had been sown in the mind of Afzhal had began to bear fruit, and he, thinking Shivaji was really scared decided to move from Wai to first Mahabaleshwar and then to Pratapgad. He had sever hardships in getting his army, his cannons, his cavalry to the high plateau of Mahabaleshwar and even more trouble getting everything down into the forest of Jawali. In the meantime, Shivaji Maharaj had mobilized his troops so that half of it would be with Netaji Palkar on the Mahabaleshwar plateau, 9 miles from where Afzhal had capmed, and half would remain with him on the fort of Pratapgad, both of  which would be in hiding in the Jungles of Mahabaleshwar, Pratapgad and Jawali. 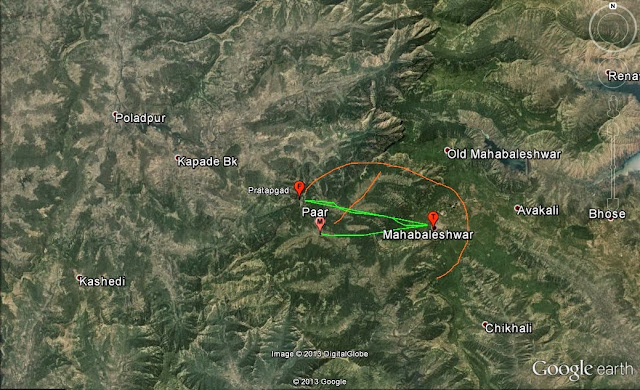 Convinced that Shivaji was really scared, Afzhal made the mistake of moving into Jawali. Here, two things went wrong for him. 1st- his army got divided into two parts- half of which landed up on the foothills of pratapgad in Jawali the other landed up in the forest at Par.  The second- due to supreme ego, arrogance and lack of caution and unprepared scout reports unknown to the Afzhal Army, they were now surrounded by Maratha army, dispersed and hiding in the jungles and hills, from all the sides who were just waiting for orders to attack. This greatly boosted the maratha mental strength, for now, even if Afzhal had killed Shivaji by deceit, the fact remained that he was to face defeat at the hands of the Marathas.

I will not go into the details of the meeting between Shivaji Maharaj and Afzhal khan- for that is an immense story that needs to be handled individually. It is more of a story, and deviates away from the main agenda of troop mobility. As shown in the above picture, on the day of meeting between Afzhal and Shivaji Maharaj, unknown to Afzhal, his army was surrounded and was to be routed. The meeting took place on 10th November, and fortunately for us, not only Shivaji Maharaj managed to evade the evil intentions of Afzhal, but also managed to kill him outright and give a morale boosting start of what was to follow.

The Maratha Counter offensive and the capture of Kolhapur:

With all eyes set on the meeting at Pratapgad, the stations of Pune, Shirwal Saswad and Supe were unprepared for Maratha attacks. So were the 3 royal ships at the docks of Rajapuri. After Shivaji successfully killed Afzhal, a signal was sent to launch an all out attack on his Army at Jawali. Afzhals army was routed, and many well known sardars were captured or killed. In the mean time, the 4 stations of Pune, Saswad, Shirwal and Supa were captured, and one ship of the royal navy of Vijapur was captured, though the rest managed to escape. 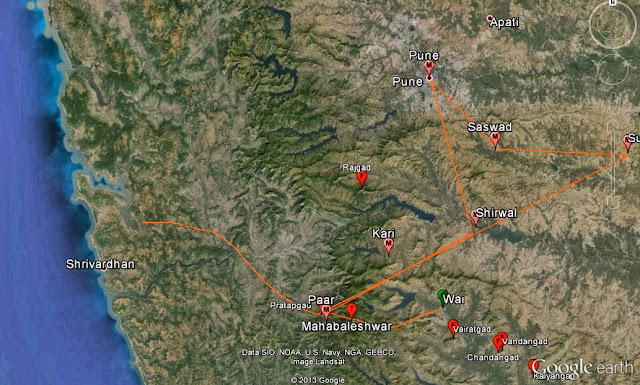 (The pre planned Maratha Counteroffensive on the 10th November)

A bulk of Afzhals army started retreating towards the reserve forces in Wai. but before they could reach there or the reserves at Wai could be called into action, the Marathas attacked Wai at night and won over the force stationed there. The army of Afzhalkhan started retreating towards Vijapur, and the Marathas gave them a solid chase. Towns, forts and military outposts on the way were almost empty and fell as easy pickings to the Marathas. Te movement was so swift that forts in todays Satara and Sangli districts were soon run over. Afzhal was routed on the 10th of November. Wai was captured on the same night and 11th November morning. In a mere 15 days, Shivaji Maharaj had captured all area, towns, and forts streching from Wai to Kolhapur, and on 25th November, he won Kolhapur. After 2 days, the key of Southern India- Panhala was under attack by Marathas, and on 29th November it was captured. These actions were so rapid, that the Sultani court at Vijapur was first given the news that Panhala was captured by Marathas, and then the news came that Afzhal khan was killed. These were hammer blows to the Sultan. In the meantime, Netaji Palkar and the Maratha cavalry under him attacked the city of Vijapur itself! Such was the nature of Maratha swiftness. 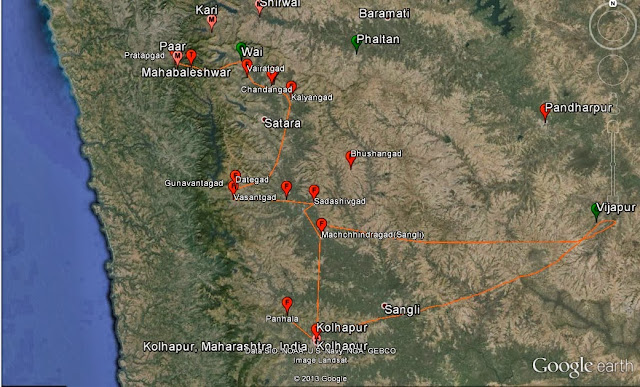 This war was the most important war in establishing Shivaji as an undisputed leader in the south for it drew the attention of the court of Delhi as well. The sultan of Bijapur made one last attempt to capture Shivaji at Panhala after this, though Shivaji managed to outwit him there too and escape from the siege. Nevertheless, this whole Afzhal episode provided a much required morale boost both for the military and the general public that the idea of Swaraj was indeed justifiable and sustainable. It gave inspiration to numerous other victories. This formed a blueprint of the classic Maratha defensive-offensive- politics- cunning- all in one war strategies which continued for years to come. This was our Ganimi Kawa, or Shivaneeti. This was our DNA till 1818, when the British managed to somehow mutate it. That spirit though weak still lingers in all of us.

Thoughts:
Today politicians of Maharashtra like the Sultans are destroying out great state and ideologies given to us by Shivaji Maharaj. Caste based dirty politics, lawlessness, deviation of funds for self interest are rampant. Last time this became a problem, the Lord Narasinvha rose from the Stambha called Sahyadri and disemboweled the Hiranyakashyapu of that day- Afzhal khan. Todays Hiranyakashyapus are unfortunately our own people- but nevertheless they are Hiranyakashyapus. They are kicking Sahyadri,Samudra, Marathi manoos and all everything associated with our culture for their own monetary benefits. Its high time that we awaken the sleeping Lord Narasinvha in our bodies, minds and souls, destroy these modern Hiranyakashyapus and rebuild a strong, unified, cultured and lawful Maharashtra once again. The inspiration is there, its just that we have to ignite it from within us.

(Ive based the maps using the narration by Dr. Babasaheb Purandare, and a few articles from Ninadrao Bedekar. These may not necessarily depict the exact route, but are done based on the narration)

Thanks to Ashutosh Gavali for mentioning some required changes.
Posted by Chinmay Datar at 09:12

Down the memory lanes... by Chinmay Anil Datar is licensed under a Creative Commons Attribution-NonCommercial-NoDerivs 3.0 Unported License.